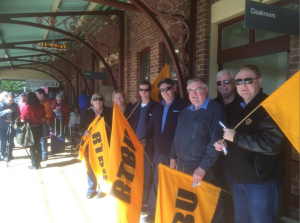 The Newcastle railway line is being truncated at Wickham, meaning commuters will have to change transport modes to travel direct to the Newcastle CBD.

Commuters from the Hunter region (eg Maitland, Dungog, Scone) will no longer be able to get directly into the heart of Newcastle. The State Government has provided no evidence why this change is necessary or how this will effect public transport.

The NSW Government claims that this change to the railway line will increase patronage are dubious. Research on transport patronage shows that increased financial and time costs, as well as the requirement of changing modes, discourage a large proportion of people from using public transport.

Any light rail network should be an addition to, not a replacement for, the current rail service.

The RTBU consistently stands in solidarity with the Newcastle community with a visible presence at organised gatherings in an effort to stop Transport Minister Gladys Berejiklian’s outrageous plans to trash rail transport in Newcastle.